Beyoncé debuted Sir Carter and Rumi on her Instagram on Thursday night, dedicating her fans and followers alike. (Well, yes we are also wondering about the names). That incredible blue veil, those gorgeous flowers resonance of lush garden, and the teeny tiny little human queens affectionately embracing in her arms.

Since Beyoncé does everything on purpose, you can bet that this birth announcement is definitely pointing at some huge connections. If her pregnancy announcement picture was encouraged by Virgin of Guadeloupe pictures, then this announcement make deliberate connection to Sandro Botticelli’s incredible work ‘The Birth of Venus’.

The Italian Resurgence painting portrays the love, goddess of sex and fertility incoming on the coastline after being natural or being born. Beyoncé is dissipating doing the Venus leg pose in her birth pronouncement. The pink mantel the elf is about to swathe over Venus also retells us of the one she dons in the snap.

Then there comes that gorgeous blue veil. Same as the pregnancy pronouncement, it reminds me of the ones represented by the Virgin Mary in so many resurgence paintings.

But the thing I was wondering was that great length to generate an extravagant photo, why? For starters, it’s Beyoncé and you can never judge what she can do because she can do whatever she wants because she is a Queen Bey, right? And the second thing is, off-the-cuff pregnancy announcements are so UNEXCITING. Eventually I like what Vox’s Constance Grady said about it. As he said that Beyoncé’s choices for pictures are not accidental, whatever she does is not accidental. Venus stands for sex and erotic beauty while Virgin Mary usually stands for purity, chastity and maternity. In west culture, people are obsessed with keeping both ideas separate but Beyoncé has her own rules. She is a saint, a mother, goddess or sex and beauty, all at once. 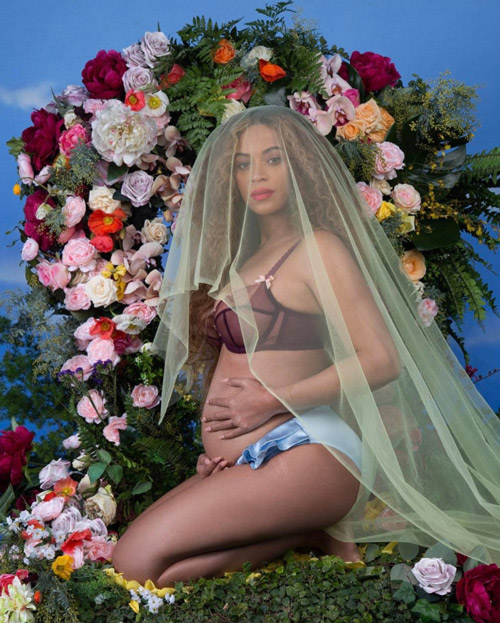 Tell us about the sweetness of Beyonce’s picture. And also the message behind it.